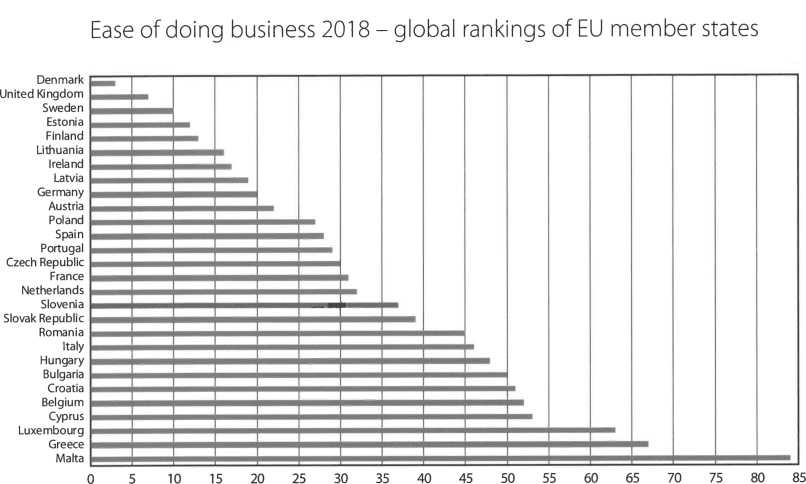 Slovenia’s business environment is stable. Measured by the World Bank’s Doing Business indicators, Slovenia was placed 37th among 190 economies in 2017. In comparison with other EU member states, it stood behind the Netherlands and France but ahead of Luxembourg, Belgium and the Slovak Republic, among others.

The strongest feature of Slovenia’s business environment is seen in the category Trading across Borders, where it is among the top scorers as it is deeply integrated into global supply chains and exploits its strategic geographical position as a European crossroads. Another dominant feature is the low costs of starting a business. According to the World Bank’s Worldwide Governance Indicators, Slovenia also scores 4th best among EU member states in terms of political stability and lack of violence.9

Relative competitive advantages of Slovenia’s business environment from a global perspective also include resolving insolvency, where it scores 10th, ease of getting electricity (19th), and protecting minority investors (24th).

The three biggest drawbacks are difficulties in enforcing contracts, dealing with construction permits and getting credit, with two of them expected to ease as the Slovenian banking system started a new credit cycle to the corporate sector in 2017 and a new law regulating construction permits enters into force in June 2018.